skip to main | skip to sidebar

Howie is playing with his bean-bag chair. Ripping it apart hasn't occurred to him yet, but that's just a matter of time. He's here because I'm here, and he can't stand to be alone. It's not separation anxiety, it's the pack-animal in him. Dog's need to be part of a pack, and we're his.

The Monks of New Skete recommend tying a new puppy's leash to your belt-loops while inside, so the dog gets used to following you around. That seemed odd to me, but now I think they're probably right about that, too. "Too", because we've taken their advice about a number of things with Howie, and they've all paid off.

Something I've learned this time around is the value of socialization. We got Phyllis when I was seven months pregnant. Does that seem stupid to anyone? I swear it didn't to me at the time, but then again, I was hormonal and wanted a baby I could actually see and hold. At 7 weeks old, Phyllis fit the bill nicely. We bought an outdoor kennel for her so she'd always be able to got outside whenever she was bored. It turns out that was mistake number two.

Dogs love being outside. Howie has become a pain in the arse because he knows when I get home from work, he gets to go up to the woods for his daily run. And heaven forbit I should want to change clothes or use the bathroom or *gasp* sit down for a minute first. But that's not my point. My point is dogs love to be outside with their family. They hate to be outside by themselves. I somehow missed that with Phyllis. After a while, we started to leave her in her kennel when we were at work (if the weather wasn't too hot or cold), so she wouldn't tear the house apart. Tearing the house apart was something she tried to do at every possible opportunity. She was a puppy, a normal, chewing labrador puppy, but I was hormonal, remember. I took it personally. One day she chewed through a wall to get out of the area we tried to corral her into.

Anyway, leaving her outside seemed like a good solution. She could see what was going on in the neighbourhood so she wouldn't be bored. She had enough room to excercise a bit, she had toys, water, a shady doghouse. And after a while, she didn't seem to mind.

The Monks say not to do that. They say to keep your new puppy with you all the time. All The Time. That's what we've done with Howie. It's easier now, of course. My kids are teenagers, not newborns, and they can take on some of the responsibility. (They could take on more responsibility, but that's another blog.) As a result, Howie has been in the kennel maybe twice in the seven months he's been with us. We'll probably sell it.

Having him always underfoot can be a pain at times, but it has paid off. While Phyllis grew independent in her kennel, Howie has grown needy. I mean that in a good way. He's almost 8 months old, well into the "wandering away" stage of his development, but he doesn't wander. We can still play with him in the backyard off his leash, and he never runs away. We could never have done that with Phyllis. She would have sensed freedom and been off like a rocket. Not Howie. When we're done playing, all we have to do is go to the door, and he's there, ready to come in with us. He loves the snow, he loves to be outside, but he wants to be with us more.

And that's my best tip for someone getting a new puppy. Keep your puppy with you at all times. It'll be worth it.
Posted by Sabine at 3:09 AM 21 comments:

On Fetching: There are things Howie does that are a function of his breed, behaviours which are indistinguishable from any other labrador retriever. If you throw a stick, he runs after it. I don’t think labs have a choice in this. They chase and fetch. They can’t help it. And whatever they’ve chased, they bring back to you. A well-trained lab will then drop it at your feet. The rest (Howie) will wiggle and wag and play keep-away. Phyllis did this, too.

On swimming: Howie hasn’t learned to swim yet, but I assume once he’s been introduced to water, he’ll be just like Phyllis, who was happier in the water than she was on land. When she got near a lake or river, she vibrated with anticipation. We used to take her to a nearby abandoned quarry for a swim, and since the fastest access point to the water was a section of the ledge six feet above the water, that’s the route she took, rather than waste the 4 seconds it would have taken her to walk around to a lower point.

On snow: Labs greet every day with a joie de vivre that spreads to everyone around them. Add snow to the mix, and they’re over the moon. My two dogs have been identical in that respect. Howie leaps through snowdrifts in the wood like a really stupid deer.

On Doggy breath: I don’t know about other breeds, but bad breath just doesn’t exist in a healthy lab. In fact, when Phyllis’ breath suddenly turned offensive, it proved to be one of the very first symptoms of her failing heart.

I didn’t want this new puppy to be just like Phyllis. I would hate it if, a year from now, my memories of the two dogs had merged into one. And happily, they haven’t.

On Bringing Presents: Howie has this thing he does in the morning that is pure Howie. Once he’s been outside, he brings me a present. Sometimes it’s his squeaky toy, sometimes it’s as sock from the laundry, sometimes it’s a bone. But he never comes to me without a gift.

On Going Pee: When Phyllis had to go outside, she went to someone and barked. Then she’d go to the door and bark. Sometimes she’d sit by the door and poke at the handle with her nose. Phyllis made sense. When Howie wants out, he comes over to someone and starts to wrestle. This is exactly the same thing he does when he wants to wrestle. So for a long time, he’d come over looking like he wanted to play, someone would play with him, then he’d pee on the floor. He isn’t any better now, but we’ve clued in to the fact this dog’s communication skills are faulty, and we adjust for that.

On Eating: We had to carefully ration Phyllis’ food, because she was a glutton, and would have eaten long past the point where she was full. This, we learned, is common among labs, so when Howie arrived with his dainty appetite, I thought he must be sick. The vet assured me there are two types of labs – the ones that are pigs and the ones that aren’t. Still, feeding Phyllis was simple. Feed dog, dog eats. Not Howie. Howie follows us out to the garage and supervises the process of measuring food into his bowl. Then he sits on the garage floor and refuses to come back inside to eat. We have to put water on his food, ignore him for a few minutes, then go to the door and welcome him like he’s a guest. Then, and only then, he’ll deign to eat. We’ve told him he’s an arsehole, but he doesn’t care.

I think my next post needs to be about why labs are very bad dogs. And maybe I'll reveal my very best puppy tip, the one I wish I'd known when Phyllis was a baby. 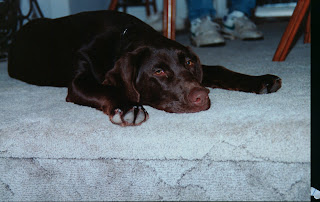 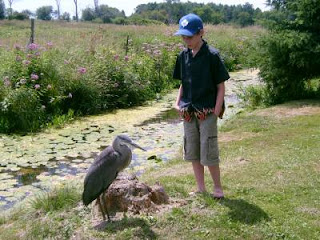 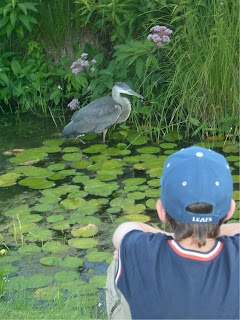 Howie and I have taken to watching Littlest Hobo reruns Saturday mornings. Howie is a fan, and I haven’t the heart to tell him London, the beautiful salt and pepper German shepherd who plays Hobo, has been dead for years. It would break his heart.

This isn’t just empty TV watching. I get a quiet half-hour to drink my coffee, and Howie, hopefully, is learning how to be a good dog. Sort of a canine intervention through positive role model reinforcement. Every week through the late 70’s and early 80’s, Hobo saved another bad Canadian actor from another precarious situation. Like the down-on-his-luck Clown who was about to lose his home (and worse – his dreams!) Then he leaves, sometimes hitching a ride on a train, to find the next sap to rescue. *

Howie drinks out of the toilet, eats my daughter’s lip gloss, and chews holes in underwear he steals out of the laundry hamper .

I’ve tried talking to him. I’ve tried yelling. I’ve tried tying him to the back door until he learns his lesson. He tips his head intelligently and wags his tail as if to tell me this time he gets it. He really, really gets it.

It’s not that I expect him to be the Hobo. Let’s face it – shepherds are brave, intellingent, smart dogs. Labs are cute dopes. I don’t expect him to save clowns from homelessness. It’s just that I’m running out of underwear. 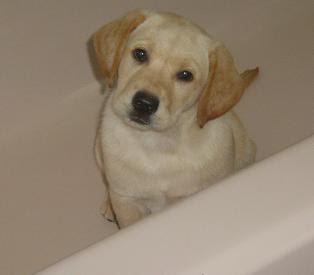 This isn't the face of canine intelligence. I think one ear is heavier than the other.

*Don’t be fooled if you saw the Littlest Yarbo episode of Corner Gas – the one where the German shepherd comes to town, and Hank thinks it’s the Hobo. That dog pretended to be a hero, then locked Hank and Brent in the shed and stole a steak off the grill. Hobo would never do something like that. Never.